Pat Barton
To listen to my latest recording, view my complete profile and then click on "audio clip" under "links"

With a few exceptions - the most notable of which was an unwise decision to attend my 50th high school reunion - 2017 was a good year. As in years past, I hope some of you will tell me and others some of your highlights from the year just ending. Use my categories or invent your own.

Best time away: A February visit to three National Parks in New Mexico & Texas, culminating with a hike that took my wife and I to an indescribable view in Big Bend National Park. Photo below.

Best musical moment: Completing the recording of eight of my original songs with my daughter on vocals, a long-postponed project. I'll be putting a link for the CD (entitled "Til There Were Two") on this blog site sometime in 2018. Stay tuned.

Best cyber-related event: It may have been a fluke. Still, monthly views on my blog hit 10,000 early in 2017 for the first time. Puny number compared to how many twittees follow Agent Orange but my modest benchmark made me as happy as Alex Jones and his fake news makes the tweeter-in-chief.

Best tall tale told: Inventing and convincingly using the abbreviation AMP - aberrational migratory pattern - I persuaded some avid ornithologists I'd sighted some Alaskan birds of prey. Imagine: If I had 43 million followers, my made-up bird shit would soon morph into an alternative fact. 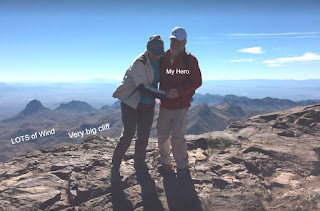 Ever notice the word you'll often use when someone says something that doesn't interest you at all is " interesting "? Pay...